A Synopsis by Amrutha MK (Research Associate, NIAS) – on “Reality of the Past and the Future: In Vasubandhu, Kashmir Naiyāyika Bhāsarvajña, and Kashmir Shaiva Abhinavagupta”
Lecture given by Prof. Arindam Chakrabarti on 28 April 2021

The online lecture series “Sanskrit Language and its Traditions: A Journey Through its History and Contemporaneity” organized by Consciousness Studies Programme, NIAS lauded for its conception, execution, and distinguished line of speakers ended on 28th April 2021. Prof. Arindam Chakrabarti delivered the concluding lecture on the topic “Reality of the Past and the Future: In Vasubandhu, Kashmir Naiyāyika Bhāsarvajña, and Kashmir Shaiva Abhinavagupta. The engrossing lecture reformulated the thesis of “antirealism about the past” and then analyzed it critically by “bringing Bhāsarvajña and Michael Dummett into dialogue with Vasubandhu and his realist Buddhist predecessors”. Prof. Chakrabarti highlighted the importance of integrating various sources through “fusion philosophy” which he used as a methodological tool in the lecture. He stressed that “fusion philosophy” occupies the place of comparative philosophy which was popular in the disciple and expressed his hope that “fusion philosophy” once served its purpose will be replaced by philosophy properly done. The lecture, peppered with anecdotes and methodological quips, concluded with an analysis of Bhāsarvajña’s accounts of the real, liberation, and bliss and a nuanced appraisal of the realism of Sarvāstivādin’s variety.

Prof. Chakrabarti began the lecture with a quote from Patañjali’s Mahābhāṣya on the nature of word which demonstrated a classical problem discussed by Gautama and Bhartr̥hari. A version of this problem of excluded middle says “just like there is no middle between real and unreal… there is no middle between the past and the future”. To present a realist view, Prof. Chakrabarti said that for all re-enactment referring to characters dead long ago (like Kamsa) or events bygone, where the actor on stage “kills Kamsa” shows the possibility for us to identify a “present reference for a past object”. To present an anti-realist view, he quoted a verse from Mūlamadhyamakakārikā 19. 1,2,6, which problematizes the point in the following way “If the present and the future exist depended on the past, then present and future would be at the past time. If present and future do not exist there (at the past time), then how would present and future exist depended on that?” He explained what he meant by the phrase “realism about the past and future” and pointed out that because realism is a “conjunctive doctrine”, anti-realism is of two types. The first conjunct is rejected by eliminative anti-realism and the second conjunct by reductive anti-realism. Then he applied this to the past and future. Prof. Chakrabarti said that realism about any state, either past or future, is that things exist in that state but are not reduceable to “wholly present things”. He presented a Dummettian formulation of the thesis, according to which realism about any state, either past or future “should be understood in terms of the conditions of their being either determinatively true or determinately false independently of current evidence…or intentions” even if it cannot be verified. He pointed out that abhava should be translated as absence and not as negation or nonexistence as customarily translated and explained the need to differentiate absence from non-existence. He gave some examples of non-existent objects and suggested that as they are non-existent, their absence can never be seen.

Prof. Chakrabarti added that Vasubandhu had presupposed a logical incompatibility between past and future as the only way to uphold realism about time. Prof. Chakrabarti found that this did not match with ordinary experience and agreed with Dummett who said that the “flow of time is from the future to the past”. In Vasubandhu’s proposition, “the same event can never be both future and past”. But in our ordinary affairs, the same event seems to assume characterizations of past, present, and future. The anti-realist view that Vasubandhu proposes is, if a thing exists in all three times, then it must always exist. Therefore, nothing exists in past, present, and future. Prof. Chakrabarti also discussed the anti-realist view of a Buddhist opponent from the third chapter of Ishvara-Pratyabhijñā-Vimarshini on having a memory of a dead person. Here Prof. Chakrabarti took the aid of Frege’s ontology which has three worlds i.e., the world of actual objective things (people, stones, trees…), the world of actual subjective things (ideas, mental images, pains…), and the world of non-actual objective things (numbers, value-ranges thoughts.). Geach opined that with this ontology we can say “the state of the past object”. Prof. Chakrabarti explained the reason for not using Frege’s distinction of the three kinds of existence to understand the thought of saying that “the past exists but the past is not actually here now”.

He discussed the views of Bhāsarvajña on “the reality of past particulars” i.e., the reality of physical objects in the past. Bhāsarvajña said that a physical object cannot possess the property of existence always as even the “substratum” is not there always. Since the substratum (state or time) changes, we can only talk about the existence relative to a substratum. A past object thus is real relative to that time. So, there is no substratum-independent, absolute sense of something being real or having existence. But some Nyāya texts say that if something is distinct from another thing then it has that individuality that does not belong to more than one individual. For the question, what sense does past exist? Bhāsarvajña said that a physical object like an actor assumes different roles. It comes to the stage wearing the garb of futurity and changes the garb to presentness and finally wears a garb of pastness for “the rest of eternity”. But he raises an objection against his own view by questioning the reality of “the costume” that he used to explain the reality of physical objects in different times. The roles themselves seem to be changing from past to present. Against the Nyāya position that memory is not a pramāņa. Abhinavagupta and Madhava said that memory is indubitable. Madhava made a stronger claim that memory is inner perception, a pramāņa. Abhnagupta takes memory as one of the three powers of the self and said that all objects have past, present and future. Paramashiva have gathered the three in the “inner citadel” of his heart and arranged them as if connected through the string of memory.

Insisting on the laws of excluded middle between being and non-being, Bhāsarvajña rejected the view that the past and future are neither real nor unreal. Bhāsarvajña goes against classical Nyāya view and opts for the Advaita path as an ānandamokṣavādi by developing a positive view of perfect liberation with bliss, and not just an absence of suffering. Though he came very close to the Advaitha view that past objects and future objects are neither real nor unreal, he did not completely accept it. Prof. Chakrabarti agreed with the form of realism about past, present, and future like the ancient Sarvāstivādins without committing to the view that everything exists now, “past is real as past, the present is real as the present, and future is real as future and the distinction between them is real” until a timeless state is achieved. He concluded the lecture with a Shivasthuthi which has direct reference to the past as an object of memory. The lecture was followed by a question-and-answer session.
Lecture Synopsis Author: Amrutha MK, Team NIAS CSP

Click on the thumbnail below to watch the full lecture video 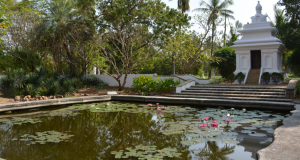